ANNIE The Musical on Broadway

Lina is a fan of the 1982 and 1999 Annie films and she wanted to see "Annie" live on stage before the Broadway run of the revival ends. On the way to the show, Lina sang "Tomorrow" and it sounded so lovely...but thankfully she understood that during the live show we are to remain quiet.  Here's a photo (shown below) of Lina in her seat, waiting for the show to begin. You can see the laundry hanging on the lines on stage. The set designer did a great job making the sets visually appealing and nicely balanced and also the sets changed smoothly from orphanage, to NYC streets to Warbucks' home over and over again. I know so many kids these days want fancy special effects, unlike Lina who wants everything "real," and that's perhaps why this revival isn't lasting long on Broadway (it opened last November). The holiday touches were nice toward the end of the show, too - a sparkling tree, giant stuffed giraffe and doll houses etc. 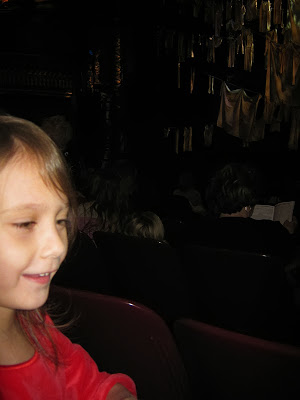 She enjoyed the performance by the adorable Taylor Richardson in the lead role as Annie (that link goes to the TheaterMania YouTube clip showing Taylor backstage...and here's a YouTube clip someone put up of her singing "Tomorrow" at Bryant Park a few months ago). The rest of the young "orphans" were also talented, in terms of following choreography and singing well, and all the kids in the audience adored the orphans. Lina also loved Miss Hannigan, performed by Faith Prince, since she was so entertaining, acting and singing in more of a funny than cruel way. Here's a photo of Lina in front of the Palace Theatre, right after the show: 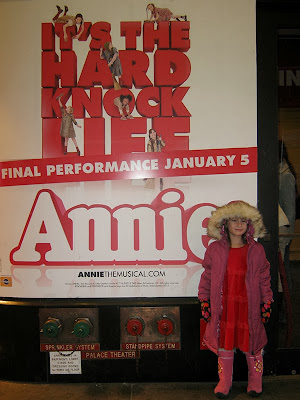 She wanted to wear her red holiday dress since Annie wears a red dress at the end of the show when they are celebrating Christmas.

Lina was most amazed "by the actress dog." Sandy was played by a dog named Sunny and Lina was impressed that the dog "didn't go off the stage." Yes, she did not jump into the audience during the acting scenes...that's easy enough when a human being is holding the collar and leading a dog...but there were a couple of times when Sunny had to go on stage by herself, stop and look out at the audience, and then walk off stage before any actors returned to guide her, so that's good training; this is a young dog under 3 years old who could have gotten easily distracted. Of course, Lina spotted the stuffed toy version of Sandy in the lobby and I bought it for her as a souvenir (and it's already a star "actress dog" in her pretend adventures with her other stuffed animals). 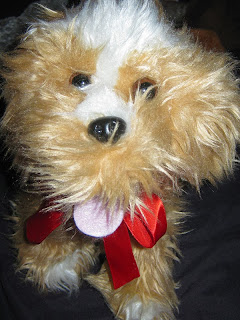 I didn't plan to have a meal at a chain restaurant in Times Square, since they are all insanely crowded with tourists...especially at this time of year. We had 45 minutes to spare before the doors opened at the theater and we were a few short blocks away (below freezing temperature outside) and we were getting hungry (the show is 2 1/2 hours long, including intermission). We popped into Ruby Tuesday, for the first time, and I was surprised how accommodating they were. "It was a delicious meal," said Lina. I was pleased with the very friendly service and the fact that we could be in and out within 40 minutes and eat a perfectly cooked meal in a comfortable setting for $40 total (including 30% tip).
Posted by pk at 7:14 PM