Hope you all had a wonderful first month of 2019! 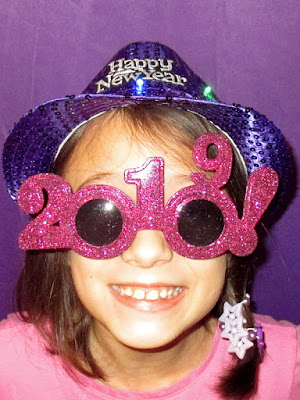 We were excited to celebrate New Year's Eve! We sipped sparkling cider. Lina loved wearing the  purple sequins light-up hat & pink sunglasses (picked up at a 99 cent shop) and recording a Happy New Year 2019 video (in Japanese) to send to folks. 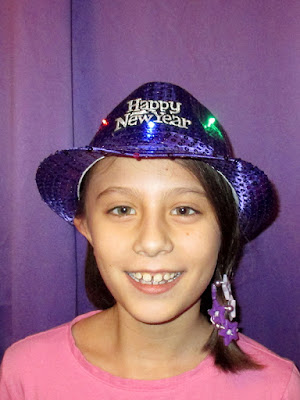 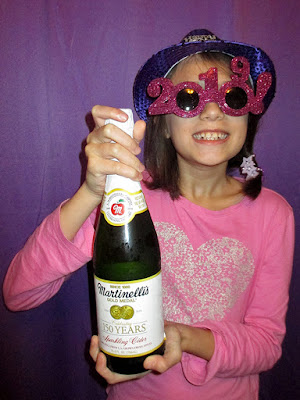 Lina kicked off the New Year with a new drop-off weekly group class, a knowledgeable teacher and a half dozen tweens & teens who share a common interest (I will probably write about it later in the spring). She already made new friends and is enjoying it greatly.

This last week of January, the "polar vortex" reached NYC...bringing a touch of snow, lots of icy patches and dangerous subzero realfeel temperatures. We did not want to risk stepping outside when actual temps were below 15 degrees F. Luckily temps are rising quickly and by the Lunar New Year (Feb 5) it will be unexpectedly warm for winter here, probably upper-50's, and we will take advantage of that with a fun field trip.

Finishing up the 5th semester of piano, Lina warmed up my heart with her joyful final practicing of "Calypso Holiday" (Alfred's Basic Piano Library lesson book level 4) and her original composition (which she created at age 9), "Dancing Under the Stars." Now, she is learning a lovely classical piece "Sonatina Op. 157, No. 1" composed by Spindler. 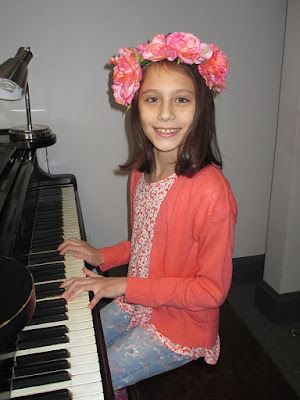 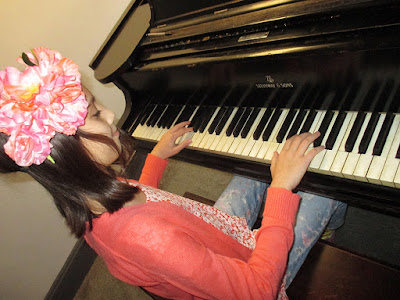 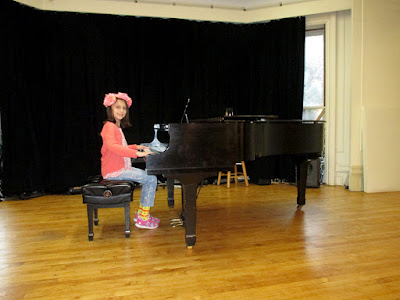 * Fun card games (in tiny tins, you can fit in your pocket): Iota and Karma

* Coolest fiction books about a robot vs. wilderness: The Wild Robot & The Wild Robot Escapes by Peter Brown  (for grades 3-7; quirky combo of Lina's 2 favorite things, robots and animals, plus there's illustrations).

* Powerful adaptation of a song by a teen: 14 year old Grace VanderWaal performing "Clearly" (we voted for Grace when she won America's Got Talent as a 12-year-old singer-songwriter-ukulele player).

*New Animal Planet zoo documentary on TV: Crikey! It's the Irwins (inspiring to see the gentle, cheerful and bright Bindi Irwin, who was homeschooled at the zoo along with her enthusiastic brother Robert, which mother Terri said was one of the best decisions she ever made & one of the last things Steve insisted upon) - now Australia Zoo is on our travel wishlist, far more opportunity to touch & interact with animals than at U.S. zoos.

* Magical anime series for tween girls: Cardcaptor Sakura (has 10 year old girl as main character), there's 4 volumes of subtitled episodes to watch, we found this show after Lina read one of the omnibus volumes of the manga books.

* Movie about friendship between 10 year old girl and a wild animal: The Fox and the Child (was released a decade ago, the year Lina was born actually, but I didn't know about the film...thankfully, we found it recently for free with ads on a streaming service and she was mature enough to deal with seeing peril and sadness on the screen).

* Just finished watching all 3 seasons of sensational emmy-nominated A Series of Unfortunate Events on Netflix  (great cast...Sunny steals the show, but the other 2 siblings and Olaf are close! Wonderful use of language, building vocabulary...with a mysterious, scary, sad and funny story, but not recommended for kids under 10!)
Posted by pk at 10:00 PM