Busy summer...but we set aside time for a day trip to Secaucus, New Jersey (one stop from NYC Penn Station on NJ Transit) to visit  Field Station: Dinosaurs. 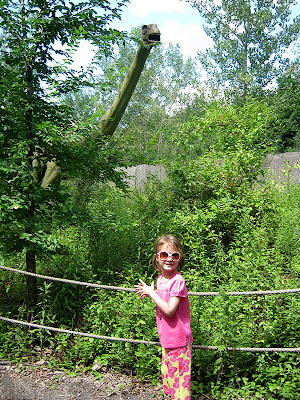 Many different kinds of dinosaurs to spot...an Apatosaurus (shown in the photo above and below), Tyrannosaurus rex, Triceratops, Stegosaurus, Ankylosaurus (armored body with club-like tail) etc. Even Pterodactyls like a Pteranodon with its wings spread or a Quetzalcoatlus perched up high on a rock make it a fun search. Some were so big, I couldn't get them head-to-tail in the photo frame (or else I would be off the trail to get the shot), including a 90-foot Argentinosaurus. 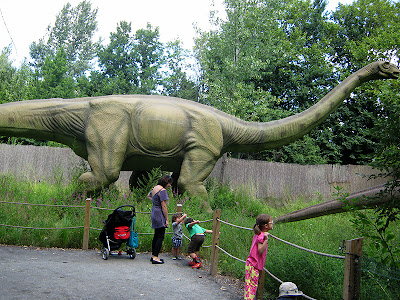 Lina has always loved dinosaurs...starting her collection with toddler dinosaur books (like Dinosaur Roar!), toys (she creates her own stories with the figures) and movies (How Do Dinosaurs Say Goodnight?...and more dinosaur tales). Though she understands they are extinct, she (like many other kids there) thought the life-sized animatronic dinosaurs (with movement and sound) were real. This adds to the excitement and makes it more fun to pretend to be paleontologists and learn about prehistoric times...fossils and evolution.

There were signs along the 3/4 mile trail to find out some basics about each dinosaur (diet, size, geographic range, time period etc.) Since Lina enjoys walking up to four miles a day, this didn't feel like much of a trek. I chose a day when it was not hot and humid...and we were wearing comfortable footwear. 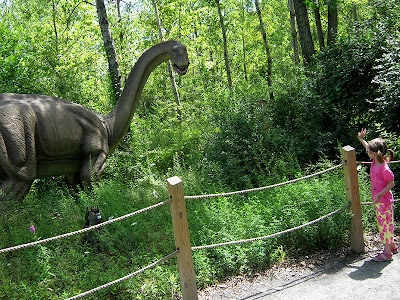 The easily recognizable Dilophosaurus (shown below), with the double crest on its head, probably ate fish. This visit was a nice introduction to predators of the past (most famous being Tyrannosaurus rex). Kids learned that scientists study fossil teeth to determine if a dinosaur may have been a carnivore, herbivore or omnivore. 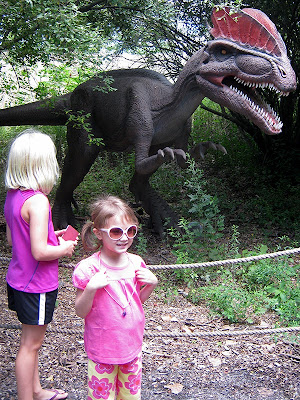 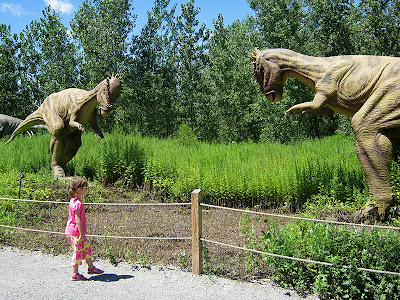 Even though we saw many parents with infants, toddlers and strollers (currently it's free for kids younger than age 3), some of the tots looked scared and they will get very little educational benefit. Kids ages 5 to 9 seemed most engaged and may remember this day for a long time (the admission fee adds up for large families, so make it worth your while). Many day camps come here on weekdays in the summer, but somehow we avoided the clumps of huge groups while walking leisurely along the trail, watching the informative and visually unforgettable 3D movie Dinosaurs Alive!, attending an amphitheater live show and choosing items at the gift shop. But it was just too many groups of kids for us to get a seat at the tables when eating lunch at The Fire Pit (though we did find a bench nearby) or attempt to unearth treasures at the Fossil Dig Site or sit down for workshops and games.

Below is a snapshot I took at the entertaining Dino Whodunit show. Lina had a chance to briefly pet the T-Rex and it was thrilling for her. She told me "it's bumpy, mommy." Even older kids seemed to act like this was a real dinosaur...though the black pant legs of the person walking around wearing the 15-foot T-Rex puppet could be seen. Dinosaur ROAR! 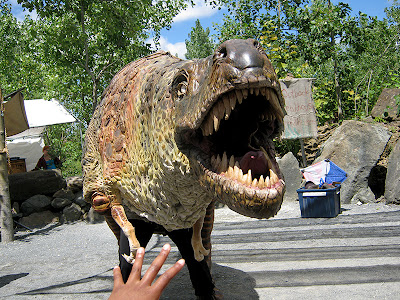