The last few days of spring were filled with good times.

We attended a wonderful Farm Birthday Party at a community garden for a lovely 7 year old girl, C. Lina met C in a literature class. The greeting card Lina made for C: 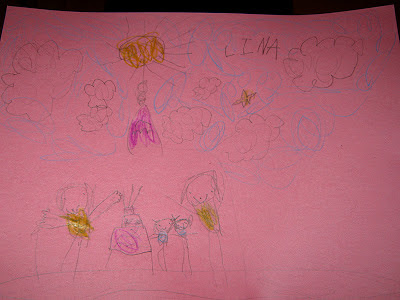 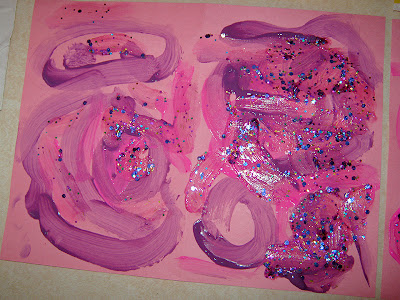 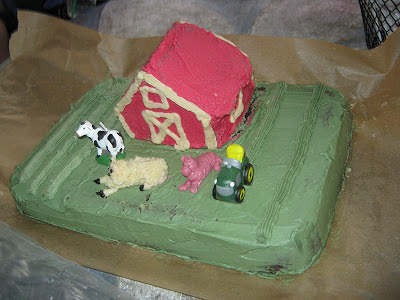 Lina enjoyed feeding the animals (Cheerios for the chickens & carrots for the sheep and goats)... 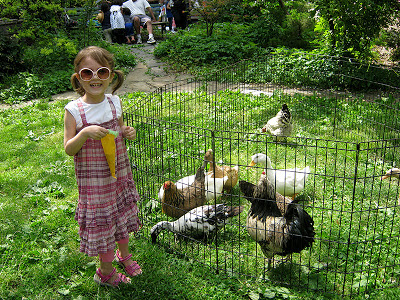 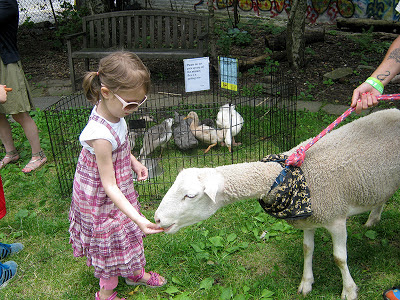 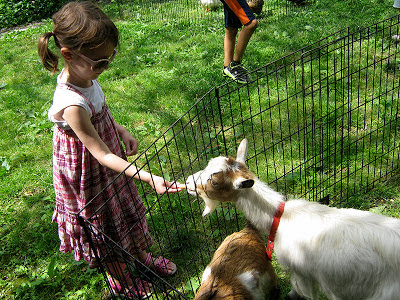 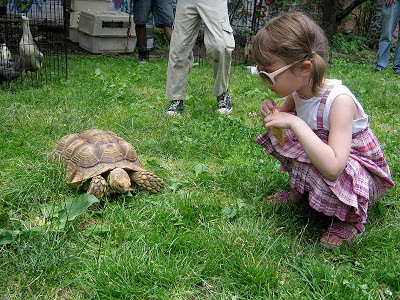 Lina was extremely happy to ride the pony... 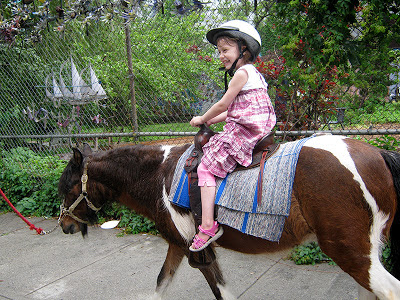 A special treat...Lina had a chance to cuddle the baby bunny named Butterfly... 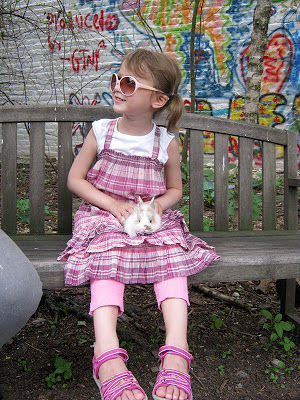 There was also a visit to the Central Park Zoo with our friend D. Lina was fascinated by the tropical birds... 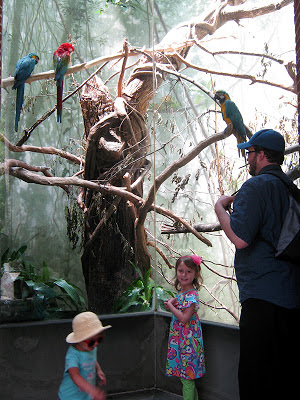 And she wanted to catch an elusive white butterfly... 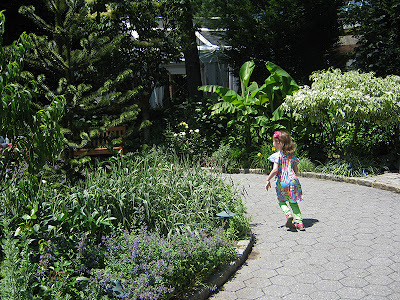 On our way out of Central Park...she enjoyed climbing some rocks. 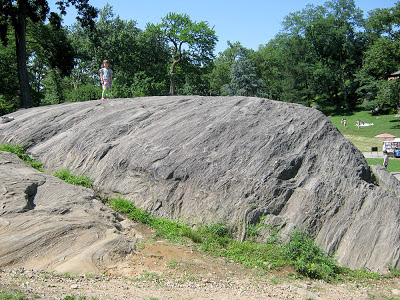 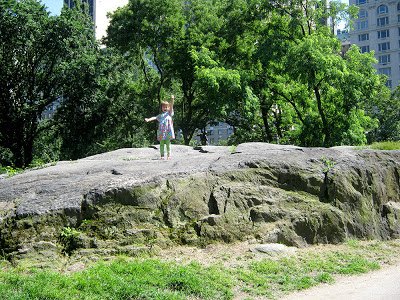 Lina had her first splash in sprinklers for this year...at J.J. Byrne Playground... 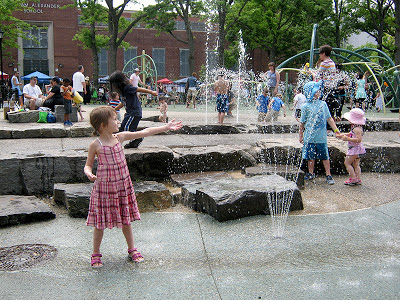 In and out of water, wearing her grippy Teva Tirra water sandals...she can run in them, climb...and walk 2+ miles without any discomfort...and they dry quickly if soaked. I have a pair, as well, for our outdoor adventures. 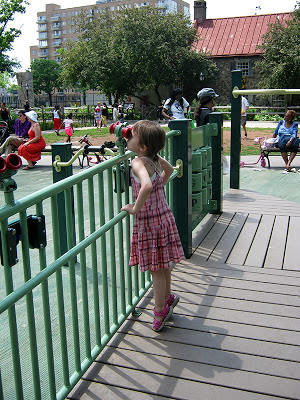 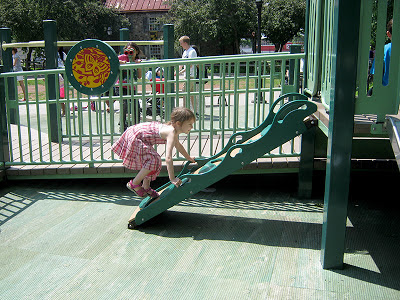 It has been a busy month for our family, but I wanted to post a few photographs to show some of the fun we had. Tomorrow is already the first day of summer. If only NYC was not so hot and humid and insanely crowded...oh well, we shall make the best of it and perhaps schedule a summer getaway.
Posted by pk at 11:55 PM

Lina was very excited to learn that the New York Aquarium was scheduled for a partial reopening on May 25. Nearly seven months after Superstorm Sandy, the public was welcomed back to a portion of the space...while workers continue to rebuild the beloved New York Aquarium. Back in November, we attended an art fund-raiser for the aquarium and since then Lina had been asking me when we can visit her favorite NYC spot again. It was bittersweet to see the wonderful place we used to visit regularly, for education and entertainment, now with a blue fence separating the back half of the aquarium which remains closed for repairs until 2016. It became crystal clear how much this 14-acre aquarium was devastated by the surge waters during the storm.

We asked grandma to join us because she hasn't been to the New York Aquarium since I was a little kid and we all had a lot of fun. It was important to show support for the hard-working staff and volunteers who protected the sea creatures and brought the aquarium back to New Yorkers and tourists. Coney Island, Brooklyn (or actually New York City) would not be the same without it. 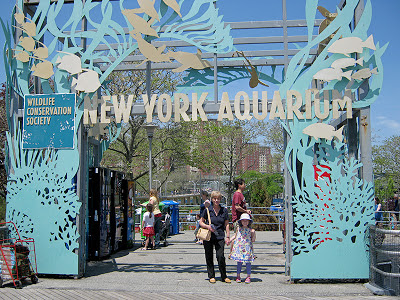 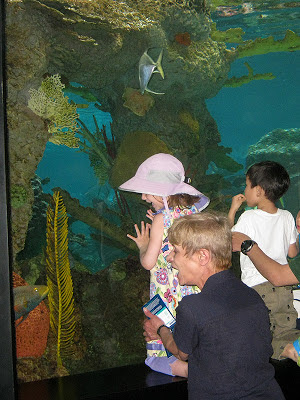 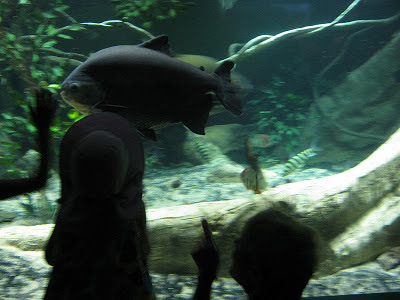 It was 90 degrees and humid last weekend...nice to take a break at the upstairs picnic tables with some cool Dippin' Dots (Cookies 'n Cream ice cream flavor, yum). 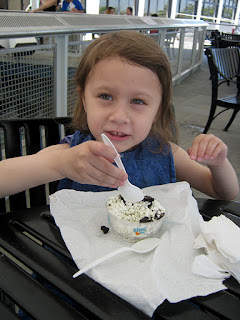 The Recovery Wall explains how they are rebuilding and describes the plans to transform the aquarium over the next three years and the support that's still needed. 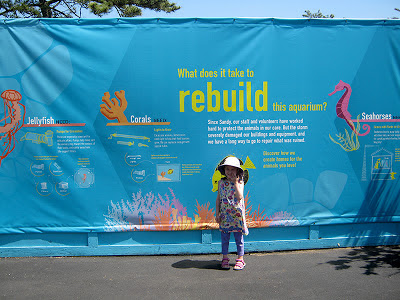 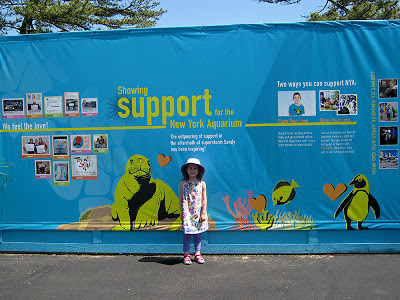 The renovated Aquatheater is open, with the very popular Sea Lion Celebration show. 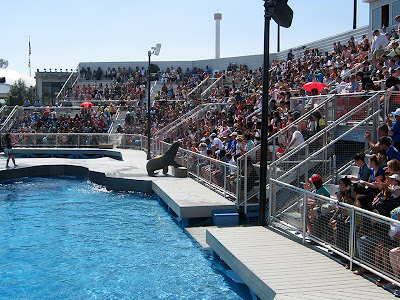 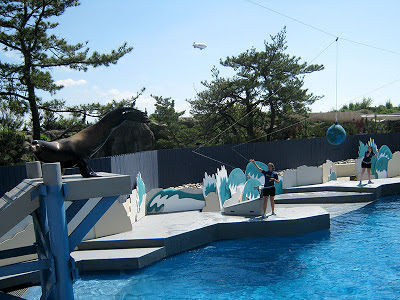 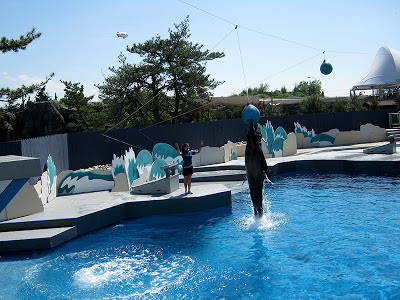 We got a quick glimpse of the penguins at the Sea Cliffs, but a pleasant surprise was that we had a chance to see the feeding of the walruses for the first time. 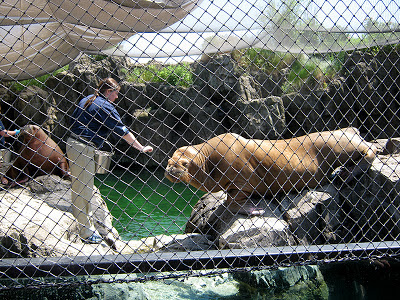 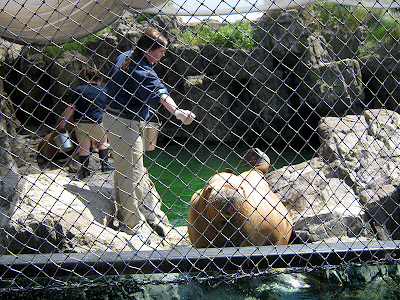 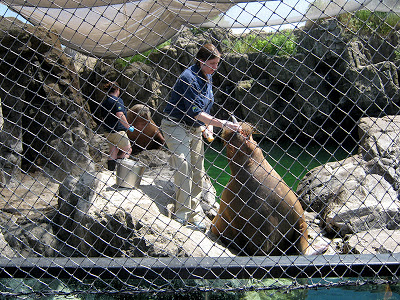 So, from the gift shop Lina chose two items (and refused anything else, saying this is all she wanted to buy, she has never been materialistic)...a walrus t-shirt and a walrus stuffed animal. 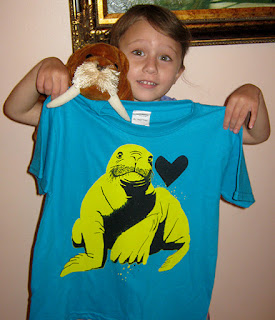 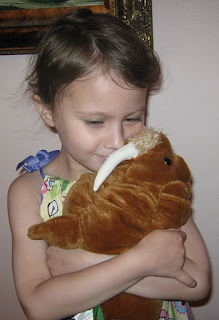 The partial reopening included Glovers Reef (sea life found in Belize), Conservation Hall exhibits that focus on three habitats: Coral Triangle of Fiji (coral reefs), the Great Lakes of East Africa (freshwater lakes) and the Flooded Forests of the Amazon, the outdoor Sea Cliffs with marine mammals (walruses, sea lions, harbor seals, sea otters) and penguins (which are flightless birds), the Aquatheater with stadium seating and the gift shop. Thanks to Finding Nemo, Lina is able to identify clownfish and anemones. Colorful tropical fish of the coral reefs (and the fascinating Coral Lab with various species of coral grown by staff) and a school of piranhas are definitely worth the visit, but we missed seeing sharks (due to return in 2014), jellyfish, seahorses, electric eels and sea turtles. The Seaside Café, which was badly damaged, is not accessible until it is repaired, but the map shows there is a food court (with food carts) outside near the entrance (we'll try to find that next time, though that means exiting the aquarium to grab lunch).

The amazing new immersive Ocean Wonders: Sharks exhibit is scheduled to open spring 2016 (bumped from 2015, due to the unexpected Sandy damage and repair priorities).

Our last visit to the New York Aquarium was for a Halloween celebration (about a week before Hurricane Sandy hit on October 29, 2012). We are so glad they chose to partially reopen the aquarium instead of staying closed for 3 years while they rebuild what was ruined. Visit often to enjoy the exhibits and support the continuing recovery efforts of the community.
Posted by pk at 7:15 PM