This ended up being a collaborative work. My witch drawing fascinated LC and she wanted to color it. LC colored in the witch's face and part of her hair and body and I colored in the rest...then LC added a pink cloud. I thought she was done, but no...she then did something amazing...LC told me she had an idea...she wanted to add a "tree with branches and leaves and apples." She drew that all by herself, enhancing my original illustration. 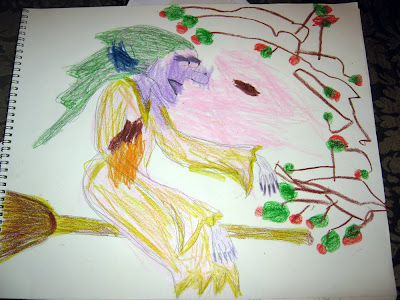 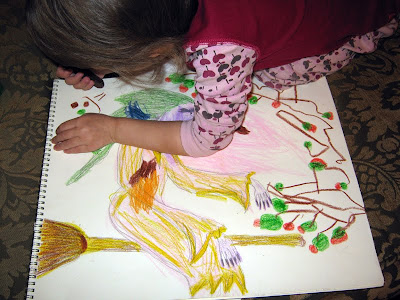 Then, LC wanted to go through the rest of my 14" x 17" sketch pad. She asked if she could color in some other pages. I joined in, now and then. She enjoyed coloring in my illustrations with me more than she seems to like coloring books that we pick up. I guess she felt like we were a team, making art together. 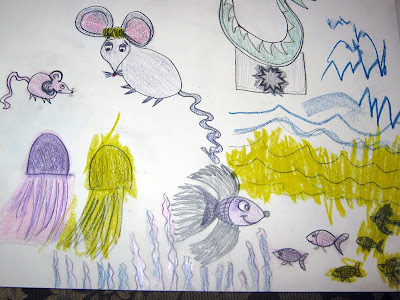 We did this for about an hour. She made me promise that we would do it again the next day. 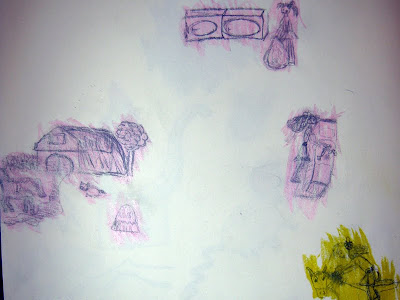 Just because we ditched the formal, daily, 30 min home lessons and structured lesson plans we started a couple of weeks ago...doesn't mean that LC gave up on learning how to read/write/do math. I decided that a 3 1/2 year old needs to play, explore, discover...and learn in a self-initiated manner. I like that she follows her own interests, asks questions...without any pressure from me (or anyone else).

This morning (as we were getting ready to go grocery shopping):

Me: "Yes. Good job figuring that out."

Me: "I can't believe you figured that out all by yourself."

LC: "I figured out hard one. Yay. Airplane start letter a. That how you spell airplane."

Me: "You're doing great, figuring all this out."

(Looking at all the objects in her environment...now spotting the outlet...)

Me: "All of those are right...you are trying so hard...and I'm glad you like letters so much."

We attended a workshop last weekend. We had a great time socializing with the wonderful kids, caring parents and awesome teacher...we made art, learned some sign language, listened to live music- cello and French horn duet - and did some yoga together etc. LC told the teacher that she wanted to be an architect (while she was building a cool structure). Then, the teacher pointed up at a large ball (painted to resemble the earth) and asked the kids what it was...and LC said "that is a planet...the planet earth." When the teacher was about to start reading a book about an astronaut and the planets in our solar system...LC said "astronaut start with the letter a." Other parents, with kids a couple of months younger than LC, told us they were impressed by LC's knowledge and surprised that she is so bright since she isn't even attending school yet.

I heard her in the bathroom yesterday singing the alphabet song that she learned last year. It feels infinitely better to just let her take it at her own pace, witnessing her self-motivated discoveries and being there to help guide her along whenever she asks for help. She is one of the happiest kids on the block and I'd like to keep it that way.
Posted by pk at 4:40 PM

collage mania - adding whatever is on hand 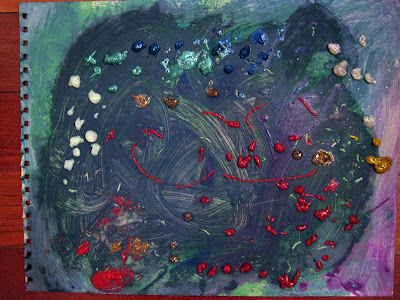 She sat at the kitchen table and I gave her the materials. She went through quite a lot of drawing pads the last few months, so I decided to take off the brown cardboard backing from a couple of those old pads. So, she had a nice hard surface to work with...and I gave her the remaining Crayola Washable Kids' Paint (non-toxic, no mixing with water necessary, bright colors, and awesome washability). When she finished the painting, I gave her a new set of Crayola Washable Glitter Glue tubes. LC (explaining her painting): "A place where they have horses. Black horses and white horses and brown horses." 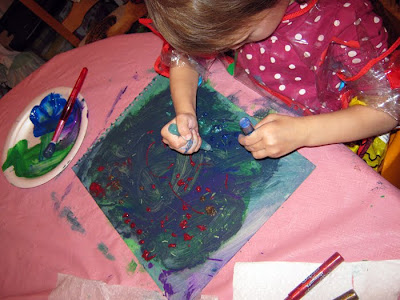 She is wearing the clear Alex Artist Apron with Long Sleeves, which will fit her until she is 6 years old. It doesn't look super comfy, but she hasn't complained yet...probably because she is used to wearing bibs for meals. Clean-up was just a quick wipe of the vinyl apron, the pink vinyl tablecloth and a little soap and water on her hands. Threw out a couple of styrofoam plates, rinsed the brush and put away the art supplies...and left the paintings on a shelf to dry. Yes, when we go to art workshops/classes, LC can go at it and get as messy as she wants in the studio rooms. At our home, we like to minimize mess and make clean-up fast and easy...but I would never deprive her of the pleasure of making art with her little hands.

She finished a second painting and told me she wanted glue. I took out the Elmer's Washable School Glue. She needed suggestions for a collage. I love mixed media collage art paintings, there are no rules...have fun using your imagination. I really should get some old magazines and create little tear sheets of all sorts of pictures and cut up some old fabric and wallpaper, too...and collect old buttons, stamps, metal pieces...put it all in a basket...so she can have a bunch of cool patterns, textures, images & colors to spice up a collage. She can take this further in the future and use various media (not just paint), opaque or transparent, and also layer the work a bit. 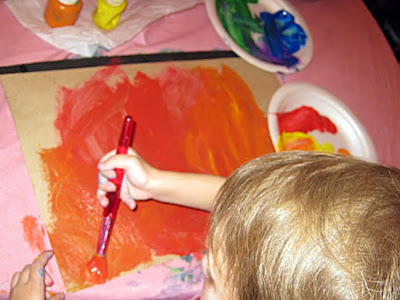 I said "how about feathers?" She liked that idea. Then, she wanted "sparkly stuff." So, I gave her a scrunched up bit of silver paper and a few sparkly shapes that she glued onto the painting. Then, she asked for "more stuff" so I gave her a yellow pipe cleaner. Then I looked in my closet and ripped off the moon & stars section of a Stayfree Maxi Pads bag (bet you didn't expect that). LC still wanted "more stuff" for the collage. So, I gave her a handful of wooden beads, then a handful of pennies. She found this fascinating and had fun sticking them to the surface and wanted more pennies. That's all I had, though. Lastly, I gave her a couple of Mickey Mouse band-aids and told her "OK, I think this is all I have for the collage, don't you think this is done now?" She nodded. There you have it. Pics below, after her artwork dried overnight. 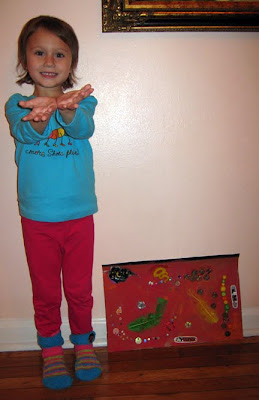 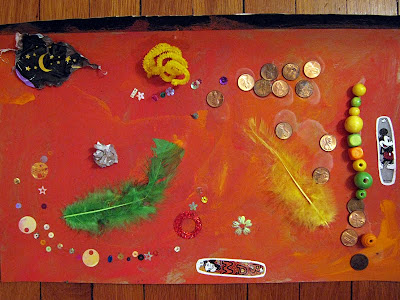 crayons & craft paper, a boat, a cake, the word sat

Isn't this such a lovely drawing? LC: "I making an old city." 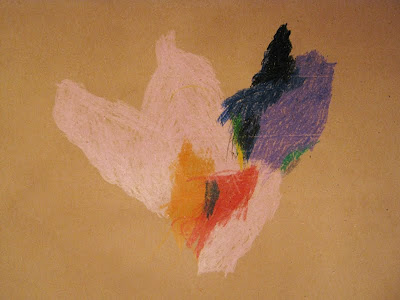 Such simple materials, too. The wrapping paper we buy from the discount store is rolled around a large sheet of brown craft paper that normally gets thrown out...so, I thought hmmmm....let's not throw it out...let me just tape that to the living room floor and invite LC to grab her crayons and draw. 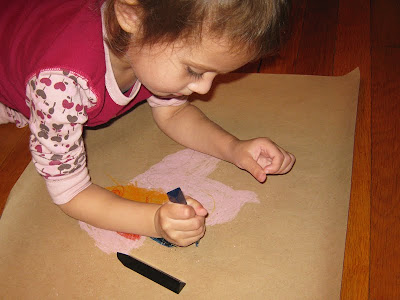 We went to a very nice 3rd birthday outing for one of LC's friends and a Melissa & Doug watercolor paint set was given to us in the party favor bag...LC didn't waste any time making a painting at home. 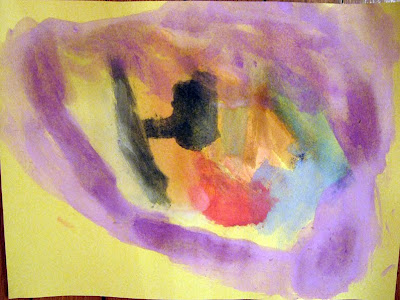 Contruction paper, crayons. LC: "A fly in the jungle...a fly came from the jungle." 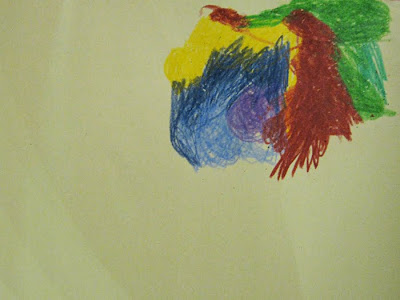 Crayola Model Magic. LC: "I made a boat!" 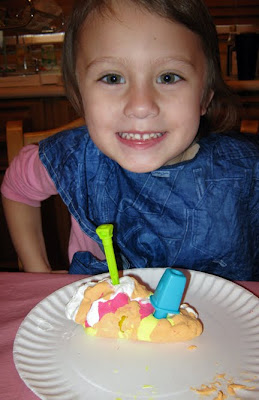 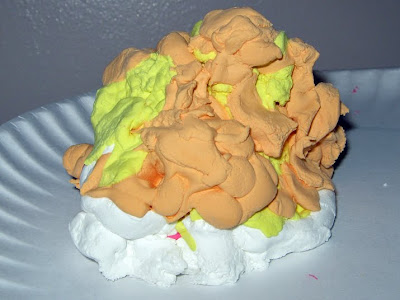 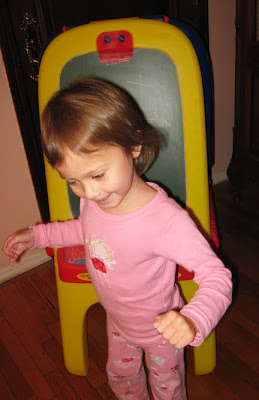 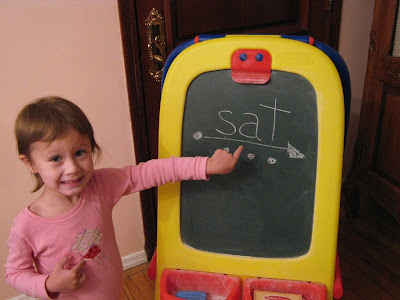 Added note (11/26/11): Though we were progressing well through the lessons...her joyfulness was being extinguished by the structured approach...I decided to abandon the book. I much prefer how a 3 year old (and 4 year old) learns about the world naturally...self-initiating...exploration...asking questions etc. It's not about bragging rights to me...it's about LC remaining happy and building on knowledge as she follows her interests. She loves books. She loves letters and numbers. She still comes up to me, wide-eyed, to tell me how this word and that word start with the same letter and end with this sound etc. But I'm not going to pressure her to learn how to read, write, spell and do math & take (ugh) tests based on some arbitrary timeline. A 3 year old should PLAY, no matter how bright the 3 year old may be...no need to school them when they should be playing...and I shouldn't feel pressured to do so by those we meet in NYC. Let's create. Let's play. Be happy.

I can't get enough of LC's crayon drawings...and neither can she :-) 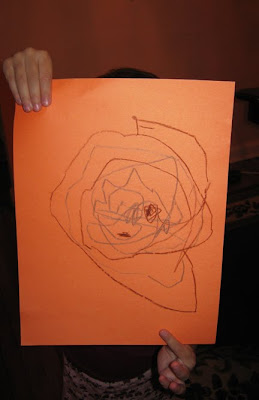 LC: "This is a baby. He is waiting for his mother to come. He is in the forest. This is a tree." 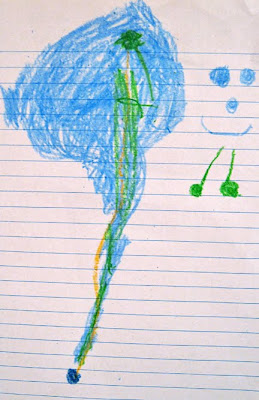 I didn't get a clear answer when I asked what this is...but I like the picture a lot. LC said something about gummy dancing. 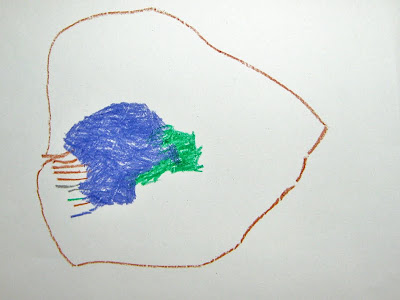 Email ThisBlogThis!Share to TwitterShare to FacebookShare to Pinterest
Labels: crayons

Lesson #1 today. I'm following the book Teach Your Child to Read in 100 Easy Lessons. It's intended for preschool children. "Bright three-and-a-half-year-olds, average four and five year-olds", who haven't learned how to read and write yet. What I love most about Siegfried Engelmann's book is that the lessons require the simplest of materials: "this book and some paper (or a chalkboard) - no flash cards, lesson plans, special books, or machines." With the "love, care, and joy only a parent and child can share!"

Here's what I wrote on the chalkboard, as we practiced making the sounds of the letters: (But she mastered this months ago, for just about all the letters in the alphabet.) 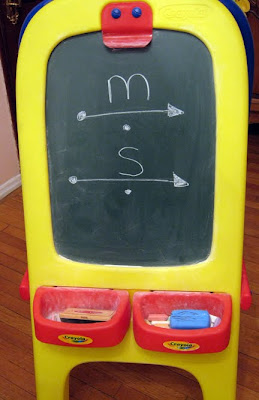 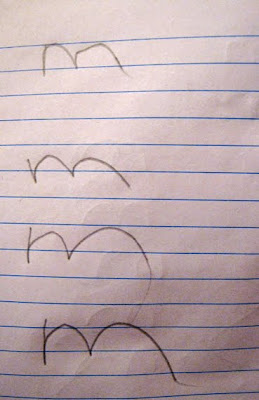 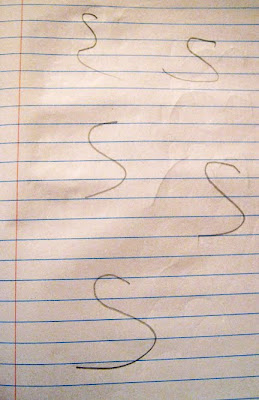 I do things in a methodical manner and this book suits me well. It follows the DISTAR program. I believe in teaching phonics, not memorization of words, so that when a child encounters a word she has never seen before...she can crack the code. I like that this book not only teaches phonics, but that it also teaches the skills necessary to blend sounds together...building on previously learned concepts. I believe in doing that for math, as well...so a child learns self-contained modules and can put them together like building blocks to master more difficult concepts.

I've tried to put this off for as long as I could...but LC has been attempting to read, write, tell time and do math for many months. Might as well teach her in a more structured manner, right?...so there aren't gaps in the knowledge.

There's so much pressure for kids to focus on academics too early in life (and then constantly be tested)...without being allowed to play and use their imagination...I believe that "play is the work of kids." Her pediatrician agreed with me...and suggested I wait until she turns 4 years old. I have been following her interests and guiding her creatively, with hands-on experiences...answering her questions, but never initiating lessons. By 2 1/2, she mastered what most kids master by 4. She is now 3 1/2 years old.

I finally gave up and we started lesson #1 today....why?

Me and My Place in Space (by Joan Sweeney)
Where The Wild Things Are (by Maurice Sendak)
Shiver Me Letters: A Pirate ABC (by June Sobel)
The Cat in the Hat (by Dr. Seuss)
Green Eggs and Ham (by Dr. Seuss)
One Fish Two Fish Red Fish Blue Fish (by Dr. Seuss)
Llama, Llama Red Pajama (by Anna Dewdney)
Llama Llama Misses Mama (by Anna Dewdney)
Mister Seahorse (by Eric Carle)
Telling Time with Diego (by Lara Bergen)
My First Mother Goose (by Tomie dePaola)
Mr. Happy (by Roger Hargreaves)
Mr. Grumpy (by Roger Hargreaves)
Dinosaur Roar! (by Paul Stickland)
But Not The Hippopotamus (by Sandra Boynton)
Opposites (by Sandra Boynton)
The Going To Bed Book (by Sandra Boynton)
How Do Dinosaurs Play with Their Friends? (by Jane Yolen)
The Feelings Book (by Todd Parr)
Little Monster's Alphabet Book (by Mercer Mayer)
Posted by pk at 9:55 PM